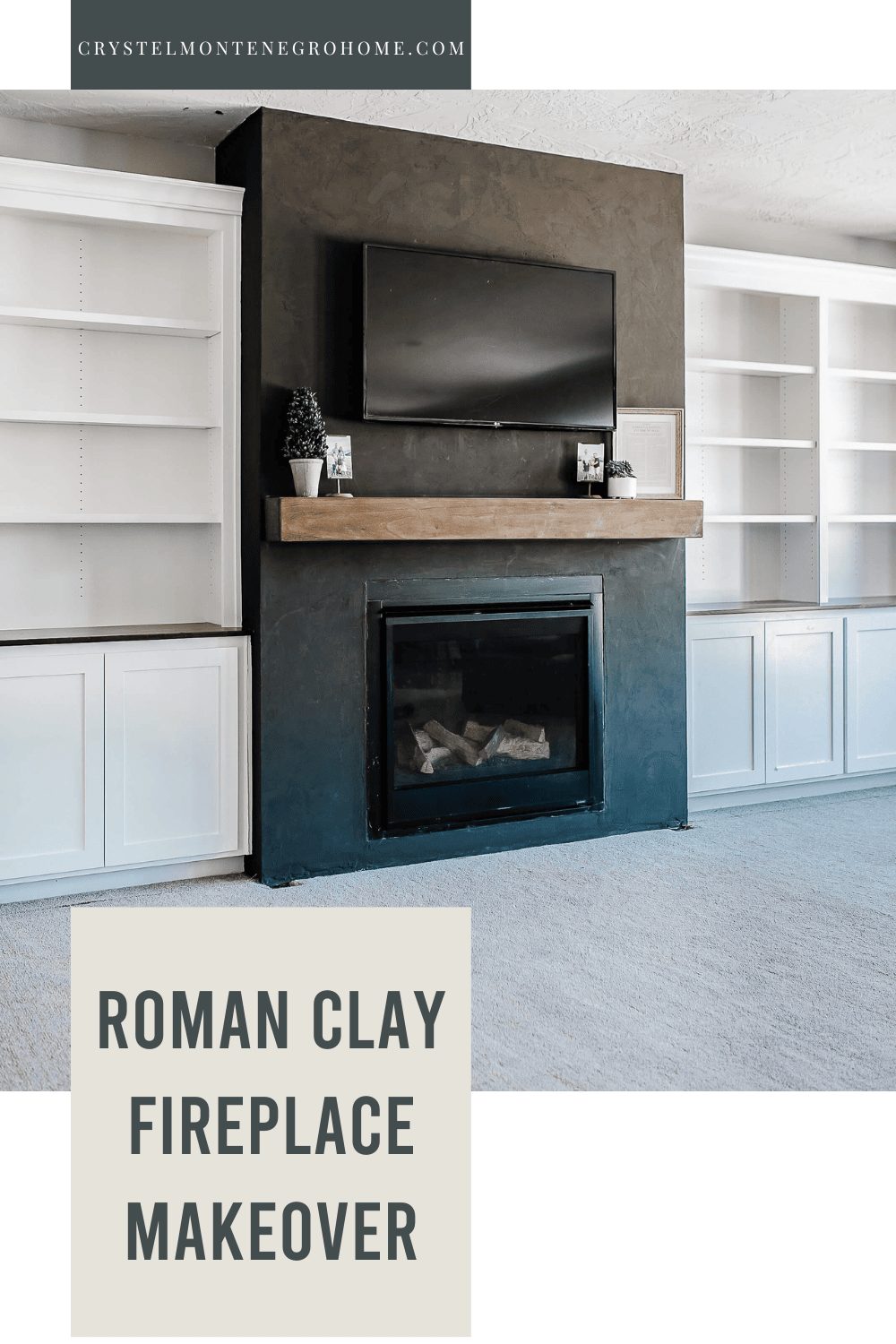 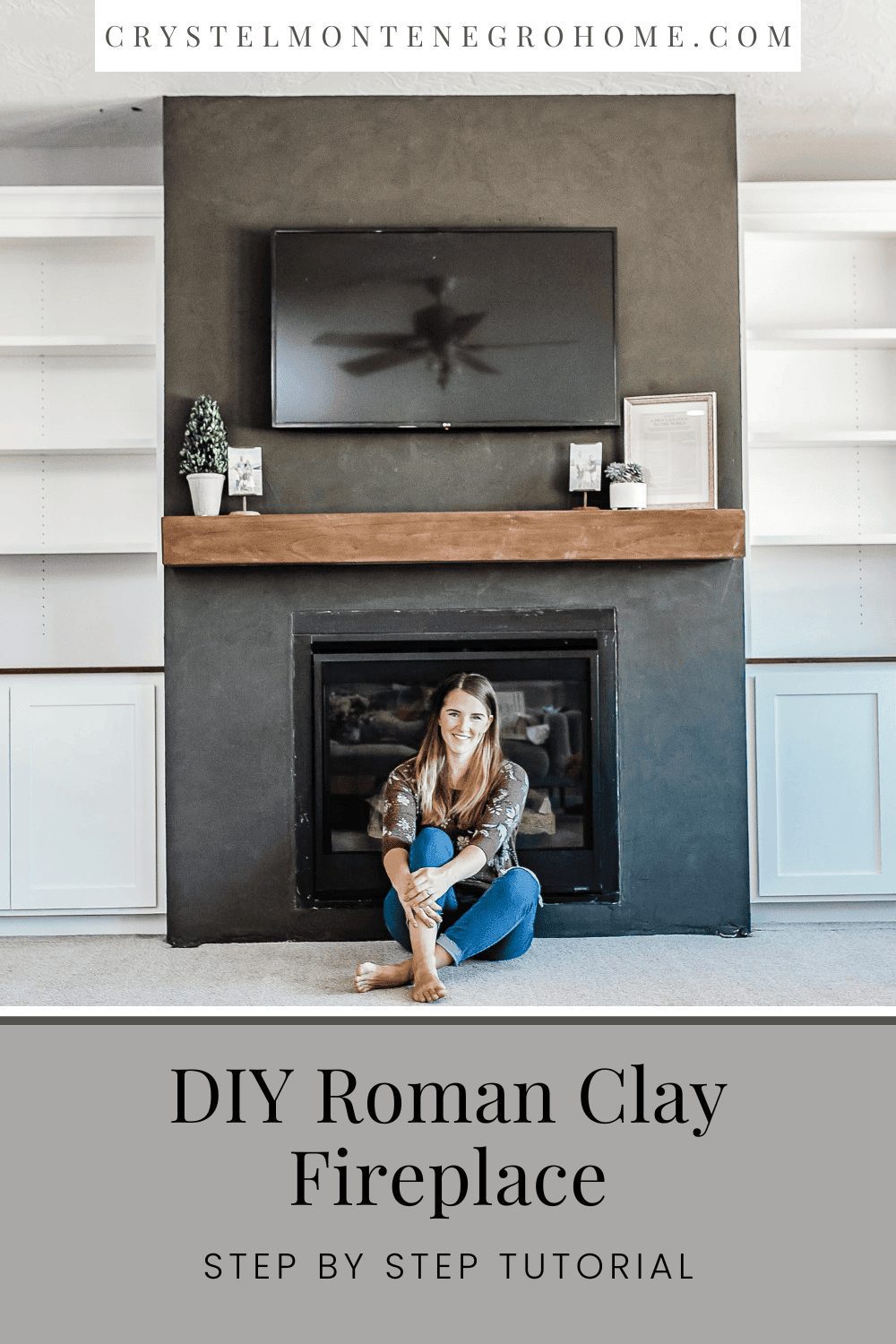 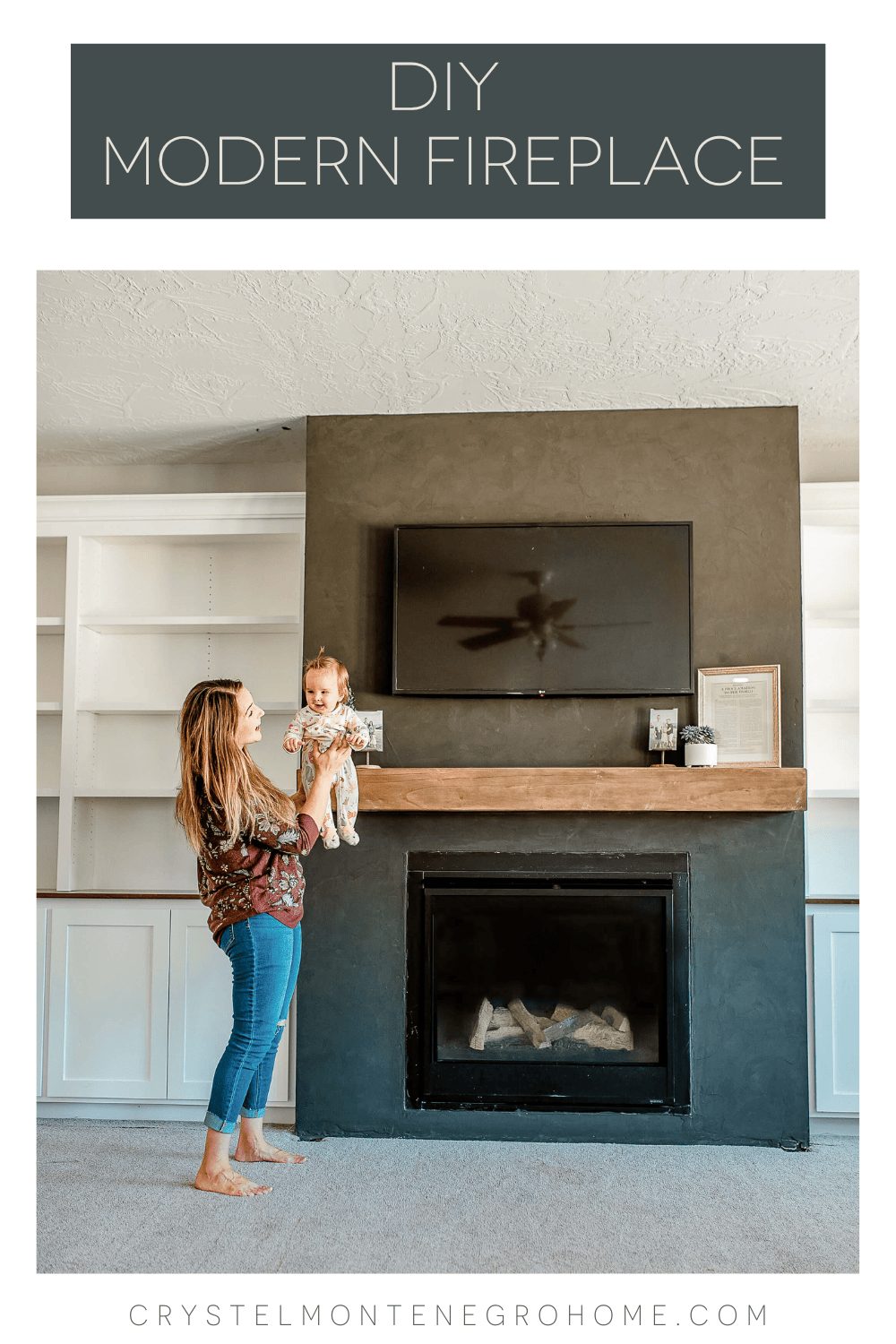 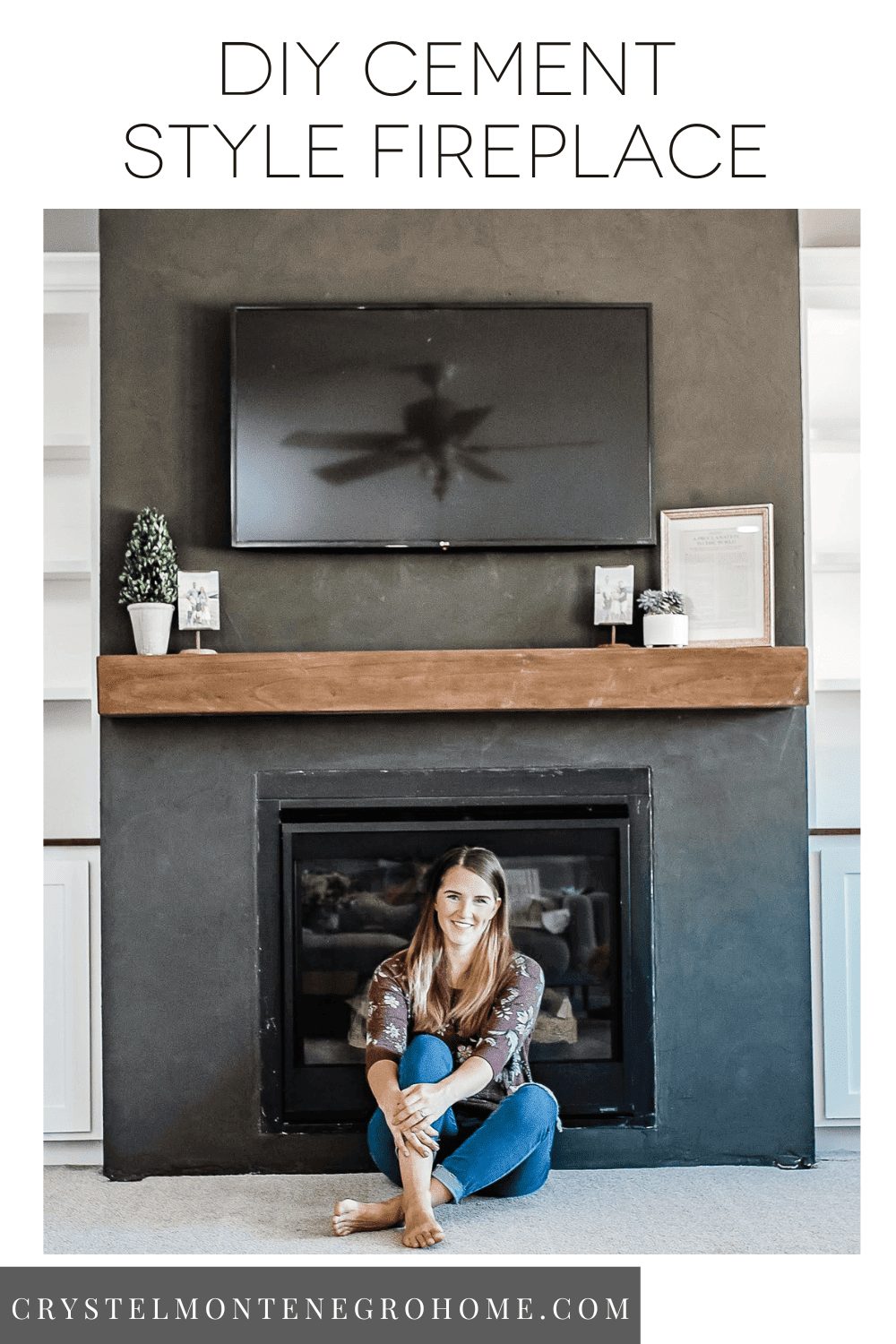 Are you struggling to decide where to start with a family room remodel? Start with a fireplace makeover. We decided to turn this “Builder-Grade-Blocky” style fireplace into a modern black Roman Clay fireplace. If the room you’re renovating includes a fireplace, you should always start with a new fireplace design.

**This post includes affiliate links. If you purchase from these links, I may get a small commission from the seller. But the great thing is, this doesn’t cost you any extra money! **

The style of my brother’s fireplace was dated, and it needed a refresh.

The first step is to tackle the demo, which was straightforward. We wanted the entire face of the fireplace to look like one big piece, so I took my pry bar and removed all the excess wood where the drywall stepped out.

The step needed to be trimmed with a Sawzall because a wooden 2 x 4 stuck out and was creating an unwanted lip.

After all that dissecting, I started to have some fun with the hammer and did some real demolition by removing the large drywall piece above the fireplace.

We removed the drywall on the top half because we still needed to make it flush with the bottom half, so it would require building out.

Since the top half of the fireplace was recessed, we needed to furr out a wall. What is furring out a wall, you ask? It’s a weird way to say we had to build a fireplace wall out of wooden studs that would sit on top of the bottom wall.

He added a square area frame in the top middle that would become a recessed multimedia box, and would be hidden by their tv, allowing for the outlet and cords to be hidden behind.

We added some stud pieces behind that square so the future sheetrock would have something it could attach to. Otherwise, that one middle stud in the back would be the only available stud to drill into, and that wasn’t enough support.

Unfortunately, after we set the new wall up, we noticed that it was ½ inch too wide and it hung out over the existing bottom wall.

We needed the wall to be flush, so my brother had to get creative. We noticed there was a ½ inch gap between the newly framed wall and the existing framed wall.

My brother took his hammer and started whacking at the framing to push everything back. It worked! After everything was straight, level, and flush, we used wood screws to secure the new frame to the existing frame.

Step 3 – Cutting Sheetrock for a Fireplace

First, we used some of the salvageable drywall pieces and cut them down to fit inside the open holes. This would give the future sheetrock something to attach to.

Next, it was puzzle time. I had purchased only one piece of sheetrock, so I had to make sure there was minimal waste. And also, the end goal is to do this makeover builder grade fireplace for cheap.

Cutting sheetrock is simple. I laid it atop some plywood and measured out the piece I needed. Then I used a drywall square to draw a straight line. I took a utility knife and cut into the sheetrock along the line, without cutting all the way through. Last thing is to snap the two pieces off from each other.

Sheetrock comes in 4 ft pieces, and the main area we had to cover was 4ft x 2in. Ugh.

I used drywall screws to secure all the larger pieces first, and then creatively cut the sheetrock into smaller pieces to cover the rest of the wall. If you ever attempt this, just do yourself a favor and purchase ample sheetrock. Don’t be like me.

Since the large sheet covered the recessed media box we built, my brother cut out the square piece of sheetrock that was covering the media box using a drill bit. Then he just pushed the piece to the back of the square and secured it to the frame with screws. Work smarter, not harder!

Look at the picture below to get a better idea of what I’m talking about.

Right now, It kind of resembles an ugly quilt.

We used two different types of mud to cover up the seams and corners.

The first joint compound we used was a fast-set compound that dries within 20 minutes This gave us maybe a 3–8-minute window for application. It was all hands-on deck to get it applied and smoothed in such a short amount of time. If I were doing this by myself  I would have used one that gave me longer working time.

The fast set compound is good for patching up large gaps and has a concrete element to it so it dries much harder than regular joint compound. We slathered on the mud, and while it was wet, quickly applied mesh tape on all the seams and paper tape on all the corners. Taping is necessary because if we just smeared the mud on and let it dry, it would crack along the seams. You want to make sure you get it good and smooth because this doesn’t sand as easily.

The corner bead was laid on top of the wet joint compound, and then we smeared more mud on top to cover the piece.

If you’re by yourself, do small batches. It’s more annoying, but it will be less waste.

Step 5 – Prepping the Fireplace Drywall for the Black Roman Clay

After it was dry, all the roughness and lumps were sanded, and we went over everything with the all-purpose joint compound. What’s great about this last layer is it has a longer working time and it’s easier to sand. The last layer really helps to smooth things out.

After everything was dry, it was sanded one last time, primed, and looked like this –

The nice thing about having a Portola black Roman Clay fireplace is that it hides all the drywall imperfections. We picked this color because it’s a beautiful dark charcoal.

I don’t like prep work, taping things off, laying down plastic sheeting, etc. But this stuff is messy, and I couldn’t be lazy, so I laid plastic on the carpet.

Portola Roman Clay is thin, which makes it easy to work with.

I started by dipping my putty knife into the clay, scraping it off on the sides of the bucket, and then applying it to the wall in a random crisscross pattern.

I purposely left some ridges because it adds to the character, and I didn’t want it to look perfect.

There’s really no way to mess it up. The front and sides were covered and left to dry overnight.

The next day, a second coat was applied using the same crisscross pattern. Each coat took me only 45 minutes to apply.

I used a paint brush in the hard-to-reach places and along the carpet line.

And here she is!

I still had a little touching up to do around the fireplace itself, but otherwise how do you think it turned out?!

Check out this Butler’s Pantry I also built for my brother. I’m the best sister ever.

You can check out this reel on Instagram for the entire fireplace makeover from start to finish. Check out my highlights for more floor to ceiling fireplace ideas.

I built, stained and installed that fireplace mantle using French cleats. Check out the tutorial. Using a French Cleat system is easier than you think.

Thanks for reading! Leave a comment if you have any questions. 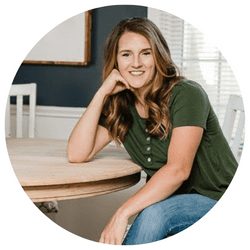